The State of the Art

The State of the Art – deconstructing current UI trends of award winning websites.

As we move past the halfway point of the year we take a brief look back at some recent awwwards.com sites of the day to see if we can identify which UI trends that are occurring with regularity and take a deeper dive to see what they add to the overall functionality and feel of the sites.

Easily the most popular UI device being used at the moment; with half of the sites we looked at featuring them. Mouse trails can add a lot of visual interest and excitement to the screen simply because they are non standard and therefore unexpected. From a functionality perspective, if implemented well, they allow the user to have more context for the elements on the screen that they are about to interact with. Think of them as being like a tool tip for elements on the screen, allowing more complex interfaces to appear more simple. For example on the 14islands site (below), the mouse trail changes to a play button when your mouse is over a video and changes to a link icon when your cursor is over a panel allowing the interface to be totally uncluttered. Mouse trail turns to a tool tip for a dragable gallery 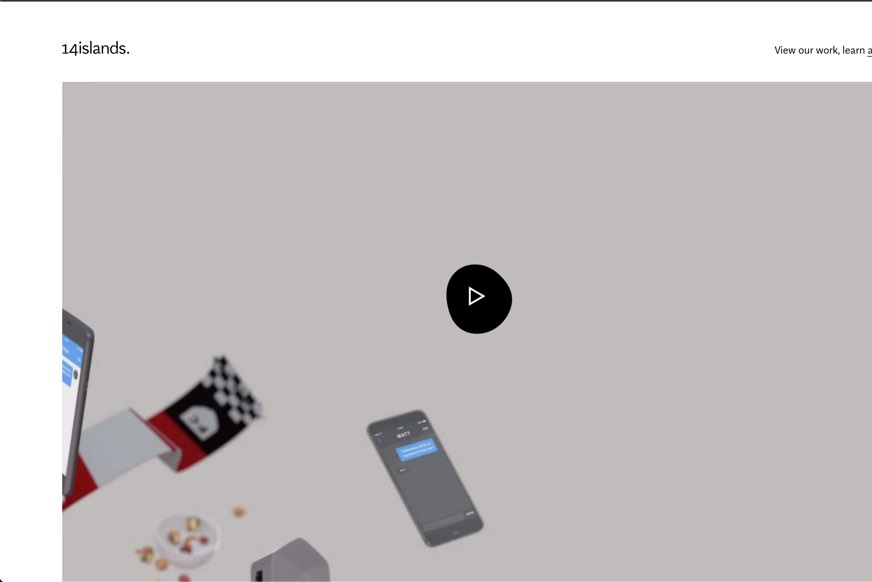 Mouse turns into a play button when over a video

Big headers are all the rage at the moment and they only seem to be getting bigger and bigger. The main benefit of having a very very large header is how impactful they are; you can really get over the key information you want the users to know right from the start. From a usability perspective it’s really nice to land on websites where you are not immediately overloaded with visual clutter and can digest the purpose of the site before making the next decision on what to interact with.

This is definitely a new phenomenon but circles in interfaces seem to be appearing with more and more frequency. It’s less easy to define and identify the use case for circles but one possible use is to break up the grid and add some softness and flow to the layout. Another function of circles is that because they are so different your eye is always drawn to them and therefore you can use them for key information, or for a unique and distinct main button. They also lend themselves well to being used as a background to a hamburger menu button which can also be used as a nice transition into the popup menu. The Moon Safari site is built around circles, including a nice menu trasition Circles on the Rekki home page function as key interactions

4. Bold use of Key Lines

Keylines are curious because of their dual function of being used to both divide elements and connect them depending on the context of where and how they are used. Keylines also allow you to divide content without having to use a different background colour to differentiate areas of content on a page which can lead an interface being stripey and thus allow the site to flow more and feel more cohesive as the user scrolls. Bold use of keylines feels fresh right now because previously many sites have tended not to use them in favour of Google Material Style cards or panels, which have become all pervasive in the last few years. Lazy loads are being taken to the next level with sites animating content onto the screen as the users scrolls in more and more creative ways. The benefit of the lazy approach is to allow the user’s eye to focus on what is currently on the screen before they scroll to the next content, and also the designer has the ability to influence what elements the users see and in influencing user behaviour.

Awwwards.com sites of the day are a really good place to keep an eye on new trends as they represent the cutting edge in website design. The question is… does having these devices in your interface mean that your work is more likely to win a site of the day? I would argue that you can not win a site of the day without including at least a few of these trends however the real goal, as always, should be to make sure that these devices are implemented to the benefit of the user.

The team at JTB Studios